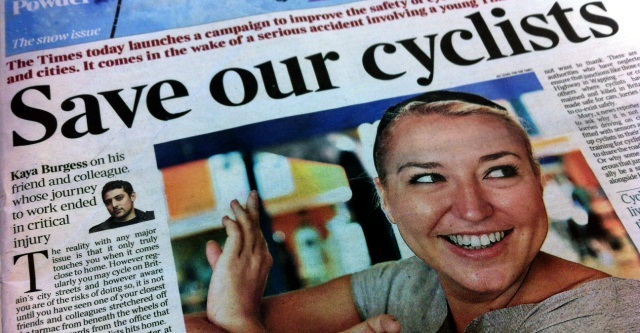 A remarkable front page story in today’s Times calls for action to Save Our Cyclists. You read that right — the Times — not the Independent. It’s not a paper known for its campaigning or its interest in road safety — indeed, a few years ago a leading columnist called for cyclists on rural roads to be beheaded with piano wire; how far they have come.

Today’s Times is not a happy result, but the latest chapter in the tragic story of Mary Bowers, 27, hit by a cement truck on The Highway on her way to work. Mary has been in a coma ever since her accident. And so the work of her colleagues — notably Kaya Burgess — brought this issue onto the front page of the paper of record. We’re not aware of any occasion where the Times has taken such a stand - it is commendable, go read their manifesto and if you agree, sign up.

Though the campaign is national, it is deeply routed in the London streets where Mary cycled. Those streets, remarkably, have become a significant issue at the Mayoral election. We have Boris to thank for that — his enthusiasm for a particular kind of cycling is what got the blue paint on the roads and the hire scheme up and running - he made cycling a bit more ‘in your face’, gave long suffering campaigners a new enthusiasm to keep trying, and unleashed a new wave of online activists.

However, in the four years of his mayoralty the idea that we can promote cycling while not making space for it on our roads has been exposed as tragically — fatally — flawed. Most cyclists don’t want to cycle like Boris Johnson, his phone to his ear, his hair blowing in the wind, his life in his hands. Most people who would cycle, but don’t, wouldn’t ever consider his approach to personal safety.

Campaigning group Londoners on bikes are asking people to pledge their vote to the candidate promising to do the most of Cycling Safety. As we approach the elections our candidates are taking positions, and all have new cycling policies — Paddick has endorsed cycle lanes at dangerous junctions, Ken has promised to make Green AM Jenny Jones the ‘supreme commander’ of cycling, Ms Jones herself is a full-on infrastructure-ist and Boris promises further expansion of the cycle hire and highways schemes.

If you cycle, or think about cycling, these are exciting times for London — but let’s never forget the terrible human cost of the progress we’ve made. Best speed on your recovery, Mary.