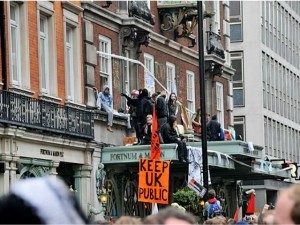 Was 2011 the year that protest became mainstream? Did something shift in the public consciousness with the crisis of capitalism, the Coalition government, the deepening cuts?

Director Boz Temple-Morris certainly thinks so, and in a new radio drama, Occupied!, commissioned by the BBC, he set out to explore what suddenly began to draw ordinary, middle-class people into a lively new movement that coalesced around a massive sense of unfairness and the demand, unthinkable perhaps ten years ago, that people should pay tax. As one actor says in the play,

"They're giving all our money to the people who got us into this mess in the first place and telling us there isn't any money left".

Initially, the idea was that the story would be told through a central character, 'Emma', a young middle class woman who becomes politicised. But, committed to the idea that drama should be as authentic as possible, Temple-Morris went with veteran activist John Jordan and others on the production team to record on location at the occupation of Fortnum & Mason by UKUncut on 26 March 2011... and found themselves amongst the 145 arrested that day.

And so Occupied! became a play within a play, the making of it part of the story. Life and art become properly intertwined in this drama as real recordings are mixed with drama recordings – and real characters are mixed with actors. As Temple-Morris says, he became interested in "layers of reality, in a playful form".

Co-written by Glen Neath and John Jordan, recording by Alisdair McGregor and directed by Boz Temple-Morris, with James Lance as James, Simon Kane as Simon, Iain Robertson as Iain, Louise Ford as Emma and Neil Ashdown as George. Occupied! is a Holy Mountain production and will be broadcast on BBC Radio 4 at 2.15pm on Friday 17 February.