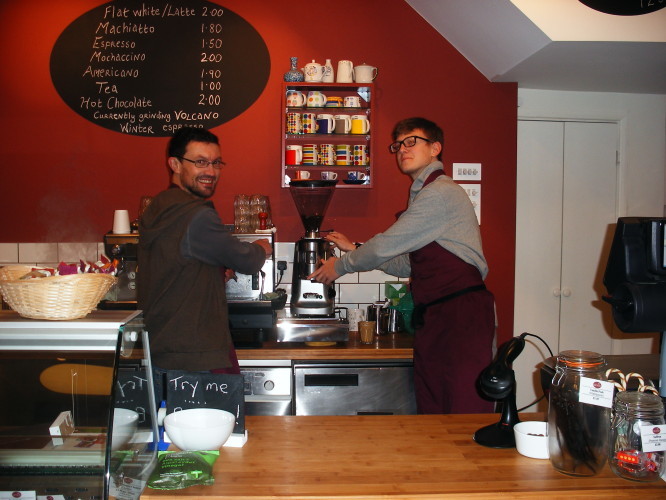 Our caffeine-fuelled quest to find the best coffee shops in London.

Given that the likelihood of getting a decent cup of coffee decreases exponentially the further one gets away from Charing Cross, it is always a delight to source the stuff out in the burbs. Not that Nunhead is really that far out: most of it carries 0207 phone numbers, so that's still pretty central, right? And it is only 15 minutes or so out of Victoria. Anyway. Thanks to Bambuni, Nunhead's shiny (really shiny) new deli, there is indeed nice coffee to be had in that part of SE15.

Bambuni opened a few months ago, and quickly captured the attention of South East London's twitterati. Since then it has backed up its on-line presence with a remarkable range of products. And a very nice brew. The coffee is Volcano's Winter Blend, and frankly it produced one of the best Americanos we've had in a while (best way to test a coffee, no? black, but stretched out just enough to taste it as it goes down).

There are cakes and sandwiches, and an astonishing number of tables and chairs. Bambuni may primarily be a shop, but it's a jolly welcoming one, with a heated patio and loads of room just to chat and chill. Owner Huey seems to be a sociable chappy (that's him on the left), and actively encourages people to pop in and have a drink (yes, the place is licensed).

Other products include an impressive range of ales, all sorts of pantry stuff (that means flour and the like) you can buy loose, some very posh pasta, and plenty of cheese.

If you take neighbouring shops Ayres the Bakers and Sopers fishmongers into consideration, Nunhead is becoming quite the gourmet enclave.

And you can discover more London Blends over here.