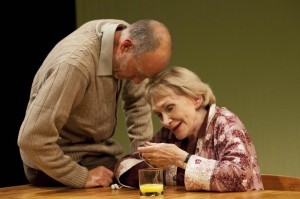 “This is the story of the end.”

But it is also the story of the beginning. As elderly couple Billy (Sam Cox) and Maggie (Siân Phillips) near the end of their 40-odd year marriage and face up to Maggie’s imminent death, memories of their younger selves (Edward Bennett as William, Leanne Rowe as Margaret) invade their home and paint a picture of the start of their married life together, with all its accompanying trials; jealous rows, disagreements over money, fertility problems and addiction, to name but a few.

Being a Frantic Assembly production, movement plays an important part in the storytelling. The past and the present are neatly interwoven, cleverly overlapping and intertwining: Maggie reaches into her wardrobe and, as she disappears inside, out spring William and Margaret to pick up where their elders left off; or Billy opens the fridge door and there stands Margaret, angelic against the refrigerator’s glow. Maggie and Billy are left gazing in wonderment as the younger versions of their spouses dance nimbly around them, cavorting lithely across the stage. But it’s the moments when the two generations interact that are the most poignant of all. Though the choreography comes over a teensy bit ‘drama school’ at first – lots of frantic writhing and basic contact work – it is deftly executed by the four actors and soon melts easily into the action, complementing the emotional nature of the story as it meanders towards its gently tragic finale.

Directed by Scott Graham and Steve Hoggett and written by Abi Morgan (she’s so hot right now), this is a tender, very human treatment of love, mortality and loss. Marriage isn’t easy, they say, but if this play tells us anything, it’s that it’s damn well worth the effort. It’s an ode to togetherness, a reminder that love is what makes life worth living. The pace is measured, the action simple, the performances subtle, but if it doesn’t catch at your heartstrings, there’s surely no hope for you, you callous beast.

Production shot by Johan Persson, with Sam Cox as Billy and Siân Phillips as Maggie.