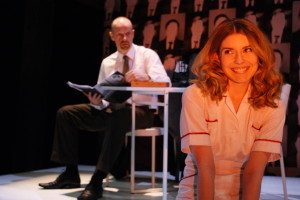 “Short is life. Cursed is the hope of rest when the work is done.”

A suitably sober thought for dark January, probably running through the minds of thousands as they drag themselves unwilling out of bed and into offices across London. Why do we do it? And what if we just stopped? What if one day you refused to submit to the never-ending routine and instead, for example, randomly axed a blameless colleague to death? Who can honestly say they haven’t considered the option, assessed feasibility, drawn up plans, mapped getaway routes… just us then?

Swiss playwright Max Frisch’s Count Oederland is based on exactly this premise. A bank clerk awaits trial for an axe murder, committed for no reason other boredom. He sees no difference between the bars of his cell window and those in his bank teller’s booth. The public prosecutor assigned to his case, stressed and sleepless, starts to feel a disturbing affinity with the killer. Then his servant girl sings him a sinister song about someone called Count Oederland, a mythical figure who carries an axe and will come to kill and kill again. Before long cracks are appearing in everyday life and society seems to be in revolt. But what can violent revolution really change?

Count Oederland, receiving its UK première 60 years late, is a very timely play. It mercilessly exposes the inequalities that are inherent in our system now just as they were in 1951, and links them directly to the familiar spectres of riots, terrorism, murder, authoritarian government, and even a protest movement with its own V for Vendetta-style symbol. It offers no easy answers but a highly entertaining ride. Frisch, best known for The Fire Raisers which deals with similar themes, is often described as an absurdist but, unlike others who wrote under the same banner, he is capable of reaching beyond his era and his plays are more than curiosities. His style is didactic but, laced with strange, Germanic fairy tales featuring phantasms, snow, forests and woodcutters, it comes alive. Real and unreality mingle, creating an atmosphere that threatens, compels and eventually moves, particularly in a remarkable scene where we finally meet the widow of the murdered man, and understand why his death matters.

The spirited production is by Cerberus Theatre Company, who deserve plaudits for unearthing a play this good, as does the White Bear Theatre where this production first appeared in late 2011. Performances are strong and engaging across the board, including Simon Norbury as a smiling, axe-wielding Prosecutor; Evelyn Adams as a character half-servant, half-wraith; Barra Collins as a ludicrously entertaining clairvoyant with a golden gun belt buckle; and Nesba Crenshaw as a fascistic Minister of the Interior who sounding suspiciously like the Iron Lady. This is a quality presentation of a play that deserves our attention. It sets us up nicely for 2012, a year during which street violence and government crackdowns seem unlikely to go away.