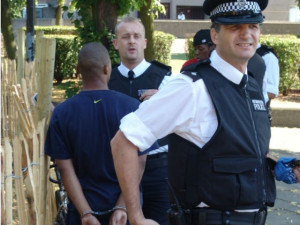 Scotland Yard is to review the controversial use of some of its stop-and-search powers, widely seen as discriminating against London's black and Asian population.

85% of those involved in the August riots cited policing as an underlying cause of the unrest, with unfair, disproportionate and aggressive implementation of stop-and-search a key factor.

Section 60 of the Criminal Justice and Public Order Act 1994, as the tactic is more chunkily called, was originally introduced to tackle football hooliganism and gang crime but is increasingly perceived as a reason to randomly stop and search young people in London's inner cities, particularly ethnic minorities. Critics say it is like the hated 'Sus' laws of the 1970s, which were scrapped only after the 1981 riots in London and other cities. It enables senior officers to authorise whole areas where members of the public can be stopped without any stated grounds for suspicion. Black people are 26 times more likely to be stopped under Section 60 than white people (and seven times more likely to be stopped and searched overall). Yet the arrest rate from these searches is only 6%.

The Met says it will reduce the authorisation of 'without suspicion' areas by 50% and focus on those suspected of violent offences and carrying weapons rather than on, for example, possession of small amounts of cannabis.

The statement comes a day before a deadline imposed by the Equality and Human Rights Commission, which was threatening the Metropolitan Police with court action over the use of Section 60 as unlawful. The Met also faces legal action from Londoner Ann Roberts, who claims the use of the law is racist, with a disproportionate number of black Londoners searched in violation of the European Convention on Human Rights.

Met Commander Tony Eastaugh, in charge of revamping the powers, said the force was listening to communities:

"We know that young black and minority ethnic males aged 16-24 are over-represented as victims and suspects. If we get this right, using the right intelligence, we should see a positive outcome around disproportionality."