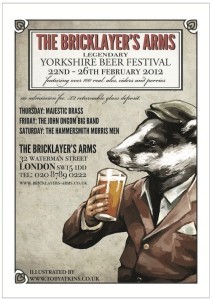 Love, pancakes, rugby... February presents many occasions that can be augmented by a good beer, and there are plenty of London venues putting on events to help you do just that. A selection of festivals and beer-related events is below, but please point out any we've missed in the comments.

The Bull, Highgate. The North London brew-pub hosts a dinner to match a variety of dishes with seven beers from popular Chicago brewery Goose Island. Tickets are £30 and available here.

The Snooty Fox, Canonbury. The Fox gets its groove on with the 'Ale House Rock' festival, which features 25 craft ales (including the new 'Unknown Pleasures' which has been brewed as a tribute to Joy Division) with a focus on unusual flavours such as Milk Stout and Plum Porter. The festival kicks off at 3pm on Thursday and there will be 50's and 60's Rock 'n' Roll played on Friday and Saturday nights, with the decks,  appropriately, manned by London beer writer Des De Moor on Friday.

Cask, Pimlico. The next instalment of their 'meet the brewer' series brings a representative from Bristol's craft ale brewery Arbor Ales to Cask for the evening.

Battersea Arts Centre, Battersea. The 22nd Battersea beer festival brings you the chance to sample 160 ales on draft - check out the provisional list here. Ciders, perries, bottled ales, foreign beers and food will also be available. Entry is £4 (or £3 before 5pm on Wednesday) with a £1 discount for CAMRA members at all times.

The Draft House, Tower Bridge.  Czech food and folk music accompany a historical overview and tasting of Budvar beers, led by their master brewer. Tickets are £25 and available here.

The Bricklayer's Arms, Putney. Real ale and English wine champions the Bricklayers Arms will offer 100 Yorkshire ales, plus ciders and perries, as part of their 'legendary' Yorkshire beer festival. There's no admission fee, but a returnable £2 deposit will be taken for your glass. There will be live music on Thursday, Friday and Saturday, and you can check here for updates on the festival beer list.