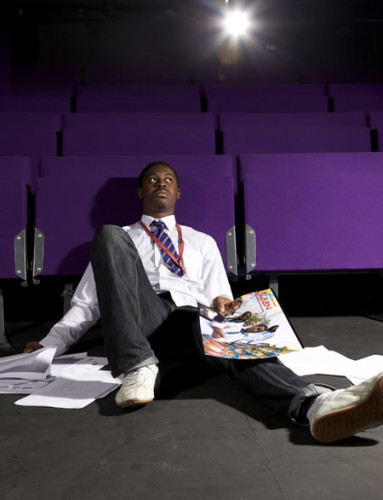 33% of all Londoners are under 26. This week, the Oval House Theatre in Kennington will celebrate the talents of this youthful third of the city with a fortnight-long arts festival called 33% London.

This'll either make you feel a) old or b) inspired. We've gone with the latter.

Held for the fifth time, the 2012 outing for 33% London features theatre, dance, spoken word and art taking place throughout the Ovalhouse building.

There are two exciting plays to catch at the Theatre Downstairs, each written by a member of the 33% Drama Company. The Grandfathers is part of National Theatre Connections, and combines movement, puppetry and text to explore the feelings of teenage conscripts; the second, a premiere called SKEEN! challenges how young people are represented, and how they choose to represent themselves.

In the Ovalhouse's Theatre Upstairs there's work by new voices, including two new full-length productions; four scratch performances; a multi-media project about not-belonging called We're Just Stuck Here For a While; and a series of site-specific short plays entitled Around the House will fill every nook and cranny of the Oval House with theatrical treats.

The 33% London festival also features live music; a spoken word night by The Roundhouse's poetry collective Rubix & Elephant; masterclasses by Frantic Assembly and film-maker Kwame Lestrade (Make A Film In A Day! suggests the website); and there'll be specially commissioned art (by young artists, of course) on show in the Ovalhouse's gallery.