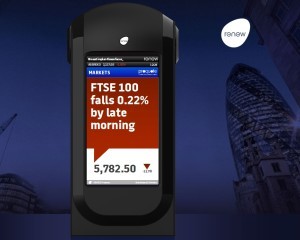 Have you seen the new high tech pods dotted around the City? They're actually recycling bins with two screens on each side, but instead of being just advertising (pshaw, any old bus shelter can do that) these will display information and news relevant to City workers, as well as up-to-date feeds about how the tube's running. And in an emergency, the screens can switch to showing information about where to go and what to do.

These bins have been in the offing for some time (see this Evening Standard article from 2007) as the City looked to replace the old cast iron bins that it removed several years ago to thwart terrorists. The new bins have been extensively tested in the New Mexico desert to check they're bomb proof (now that's a video we want to see from the company behind it all, not this buzzword bingo fest).

25 are in place now with another 75 being installed between now and the Olympics. They also come with wi-fi, so the next step is to turn them into hotspots. Our hoverboards can surely only be months away.