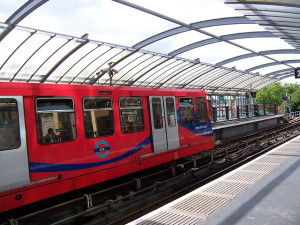 Docklands Light Railway workers have been promised Olympics bonuses of £100 per week plus overtime shifts for working on the network during both sets of Games. Serco, who operate the DLR, say an employee could net around £1,132 extra but the RMT reckons it'll be more like £2,500.

The DLR goes to four of the main Olympic venues – the Olympic Park, ExCel, the Royal Artillery Barracks in Woolwich and Greenwich Park – and organisers are expecting 57% more passengers than usual. More trains will run, for longer, and 25 rather than four stations will be staffed.

This kind of deal makes it even more likely the RMT will hold out for a better deal than that offered to tube workers last week: they've called a flat, target-linked, rate of £100 "derisory". Network Rail staff are getting a £500 bonus while London Overground workers can expect a £600 boost. Just don't strike over it Bob, OK? Please?

Photo by Andy Wilkes from the Londonist Flickr pool