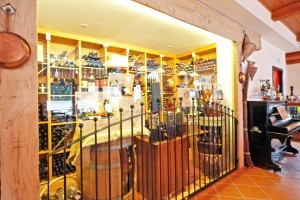 It’s hard to know what to expect from an Italian restaurant before visiting. They’ll have mostly similar menus and near-identically described dishes, but while some are the real deal serving patriotically authentic, regional food cooked with Italy’s trademark passion, others are a catch-all option taking advantage of the cuisine’s almost ubiquitous appeal.

A look at the outside of Caparossa situated at the foot of one of the stark new builds at Putney Wharf in Wandsworth, and you really wouldn’t know which of these restaurant types to expect. The moment you swing open the doors, though, it’s clear that passion is key here.

We’re given a hearty welcome as we walk in and leave the cold riverside wind behind us. The large restaurant space is cleverly set out, divided into a deli section and a slightly more formal restaurant area. A tiled floor and walls adorned with oils, wines, deli foodstuff and a large photo of Sophia Loren amongst other Italian knickknacks is warm and homely, far from what the bland exterior hints at.

The menu is also something of a revelation. The wine list takes a manual form, describing Italy’s twenty-one wine regions, as well as some of the characteristics of each area. It’s clear that wine is taken very seriously here, and hugely refreshing for us consumers to be given so much information without intimidation from an overzealous sommelier.

For an Italian restaurant, the menu is surprisingly succinct. Our waiter explains why, saying that the kitchen want to ensure that they can do each dish justice before expanding the offering. This is an endearingly honest approach, and one we could probably all back up with tales of lacklustre dishes in establishments that overflow with choice. 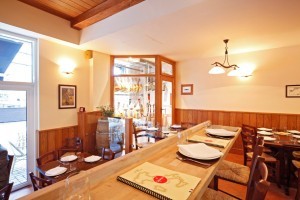 A selection of cured meats, marinated vegetables and some stunningly fresh homemade bread kick things off in fine style, and a follow-up of pasta Genovese, served straight from the pan with a hearty beef stock taking a welcome centre-stage continues the meat feast.

A recommended rib-eye steak served with parmesan and balsamic vinegar, is a simple but perfectly executed main course, going down so easily that it’s not until it’s finished that we notice we’ve eaten practically nothing but flesh. We’re not really complaining, but it’s interesting to note there’s not a single fish dish on the menu. Asking our waiter about this unusual omission, we’re told it’s all about the suppliers. In Italy, great, local produce is used without exception and whilst the restaurant is convinced of Britain’s meat offerings, they’re not sure about London’s supply of fish.

It’s hard to think Billingsgate wouldn’t suffice, or that if London seafood stalwarts such as Bentley’s can get the good stuff then Caparossa can’t, but at least the decision shows a true dedication to top notch produce.

There’s a good scattering of vegetarian dishes, and an indulgent and happily meat-free dessert selection including oozy homemade nougat. This is a case where we'll gladly forgo the fish and settle for quality over quantity.