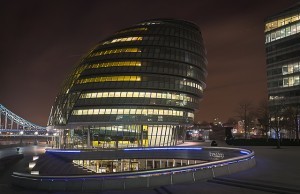 Conservative London Assembly members walked out of yesterday afternoon's session in an ongoing strop over the way the Assembly and committee chairs are allocated. The walkout made the meeting inquorate, meaning all the rest of the afternoon's work — including a debate on cycling safety — had to be abandoned.

The London Tories argue that as they're the largest party (11 members from a total of 25) they should have the lion's share of chairmanships on committees. Yesterday they wanted to ensure the whole Assembly got to vote for the Chair of the new Police and Crime Committee, which picks up some of the work of the soon-to-be-scrapped Metropolitan Police Authority. However, because the Assembly includes Kit Malthouse, Deputy Mayor for Policing and Conservative AM, he would in effect be voting for someone to scrutinise himself.

Long story short: the non-Tory Assembly members want the committee to pick its own chair. There was a vote on it yesterday. The Conservatives lost so they walked out, putting an end to the day's business. This is the second time they've left an Assembly session — and the previous occasion, in a not-very-PR-friendly coincidence, stopped a debate about reducing speed limits on Blackfriars Bridge.

Not surprisingly, those concerned with cyclist safety have not reacted well to this display of playing politics. Sixteen cyclists have died on London's roads this year; the latest, Ellie Carey, was killed on Tower Bridge Road on Friday. Her family were paying tribute at the same time the London Conservatives were, in the words of Ellie's father, acting "like children in a kindergarten". We don't think Andrew Boff's excuse is going to wash.