Ex-Londoner Anthony Windram was back visiting the UK earlier this year from the US. He wandered along to the parish of St Mary's, Rotherhithe and was struck by this unassuming church's links with the New World and the Old. The moment resonated with him as an expat, and he was inspired to write this reflective guest post. 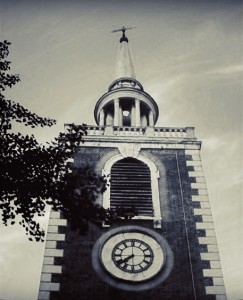 In April I took an evening walk along the Thames. It may have been the overly romanticised view of a traveller returned home or merely the diffused light so typical of London in springtime, but the dirty, old river struck me as being particularly beautiful.

At St Mary’s, Rotherhithe, I stopped and looked around its graveyard. A large stone tablet lain across a family grave told me that I was stood before the final resting place of Prince Lee Boo, the son of Abba Thulle, King of Palau, an island archipelago in the Pacific Ocean. In 1783 a ship of the East India company, the Antelope, was wrecked just off Palau. Those members of the crew fortunate enough to survive the wreck, including the ship’s captain, Henry Wilson, were, under the instruction of Abba Thulle, treated well by the people of Palau. Abba Thulle was impressed by the Englishmen’s technology, particularly their firearms and engineering skills. As the Englishmen crafted a vessel on the island to replace Antelope and which they intended to sail to China on, Abba Thulle asked Wilson if his second oldest son, Lee Boo, could return to England with him.

Leaving Palau, Lee Boo travelled to China and then on to England. During the long journey he charmed the Englishmen with his natural good humour. In England he was given a room in Henry Wilson’s home in Rotherhithe and lived as one of the family.

Two months after Prince Lee Boo’s arrival in London, he stood transfixed, one of a crowd of a hundred and fifty thousand who watched as Vincenzo Lunardi, along with a dog, a cat, and a pigeon, conducted the first balloon flight across the city. He met also with the poet George Keate who with the publication of a book on Lee Boo’s life would dictate the noble savage narrative by which Lee Boo would be remembered – that of a charming curiosity. Only five months after his arrival in London, Lee Boo contracted smallpox. On the 27th of December, 1784, aged probably around twenty, Prince Lee Boo died and was buried in St Mary’s. 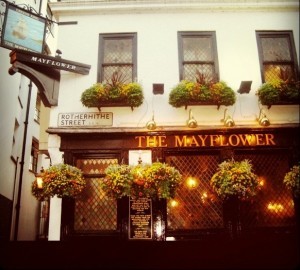 In this graveyard too, though the precise spot is not known - there is no ornate family grave, no headstone to read - lies Christopher Jones, a merchant sailor, who was buried in St Mary’s in 1622. A resident of Rotherhithe, Jones captained and part-owned a ship that he moored in the Thames, only a stone’s throw from St Mary’s. In 1620, Jones’s ship, an old wine vessel that had mainly seen service importing claret into England, was contracted to take 102 passengers, mostly English Dissenters, to North Virginia. Here in the shadow of St Mary’s, Christopher Jones unmoored his ship, the Mayflower, and began to sail it out towards Southampton. There he would be joined by the Dissenters whom he was to take to the other side of the world and leave them there so that they could start a new society.

Perhaps Jones struggled to understand these pious men and women. Perhaps he was threatened or bemused by their zealous belief that the parish of St Mary’s, Rotherhithe, where Jones had had his children baptized, and England, where he was to return to be with his family, were all irredemable in God’s eyes. Or perhaps he was simply happy to fulfil his contract to sail them out of the Old World and into the New, just as Henry Wilson would later sail Prince Lee Boo out of the New and into the Old.

Words and pictures by Anthony Windram

Want to share a personal account of a favourite (and little-known) historical spot around London? Get in touch: hello@londonist.com.