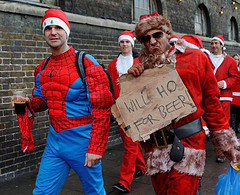 ‘Tis the season to be merry, and some of these beer festivals should help to get you in the mood. Happy festive drinking!

The Gunmakers, Clerkenwell. Starting from 4pm on Thursday and running until 6pm on Sunday – the pub is opening on a weekend for the first time – this ale and food festival will offer ‘mighty’ high proof cask ales such as Ascot Anastasia and Windsor & Eton Conqueror 1075. Food will be similarly hearty and ranges from scotch eggs to a full Sunday roast.

The Bull’s Head, Croydon. 14 cask ales and cider will be available.

Rossyln Park, Richmond.  The Slingbacks, Rossyln Park’s women’s rugby team, are hosting a beer festival at their ground from 3pm until midnight. Winter ales and spiced ciders will be on offer, accompanied by live music, and entry is free after 3.30pm. Alternatively you can head down there at 2.30pm and watch the park’s 1st XV rugby match - entry is £10 on the gate.

CASK, Pimlico. Not strictly a festival, but their next ‘meet the brewer’ event takes place at 5.30pm today with West Yorkshire's Magic Rock Brewing Co.

Pig’s Ear Festival, The Round Chapel, Hackney. Over 200 ales and ciders, festival brews and foreign beers will be available at this ever-popular event. The festival is open from noon each day and entry is £4, or £2 for CAMRA members.

The Bull, Highgate. At 7pm the brew pub will be unveiling their seasonal ‘Mince Pie and Brandy Beer’, as well as the New World pale ale that they have produced in conjunction with Steel City Brewing. Free drinks are on offer for those attending the tapping.