Dining Beyond Zone 1: The Hideaway 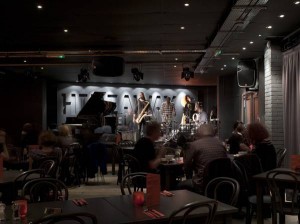 A welcome return for our Dining Beyond Zone 1 series of restaurant reviews, dedicated to seeking out quality local places to dine beyond the frenzy of Central London.

Just as we know we shouldn’t do with books, it isn’t always wise to judge a restaurant by its name either. After all, how can each and every Best Chicken & Kebab truly offer London’s superlative supper?

Onto a place that entertains a higher class of service, though, and The Hideaway in Streatham can most certainly be labelled as true to its title. Tucked down a residential side street at the back end of the neighbourhood, this intriguing venue is one of the capital’s premier jazz haunts, as well as playing host to other occasional musical events and live comedy. Call us cultural masochists if you want, but we quite like the fact that it’s less than conveniently located, that we have to hunt to find it, and that even when you’re there it’s tricky to know which door actually leads you in.

As we negotiate the confusion and are shown to our table in the air hanger-esque space, we’re amazed that a room with so much corrugated steel can feel as cosy as it does. We must also confess to feeling as cool as Draper in the Manhattan-chic surrounds as we sip a well balanced Old Fashioned lovingly crafted from Four Roses bourbon.

Rollo Markee & the Tailshakers are our hosts for the night, and despite not sharing the jazz know-how of some of the clear aficionados in the audience, we’re quickly won over by their blend of hypnotic instrumentals and tale telling vocals. In fact, we almost forget about the food.

The menu is simple and fitting of the scene. Well, most of it. We couldn’t tell you what the Thai Green Curry or Fish & Chips are like, as we quite frankly couldn’t think of a much more inappropriate setting for them. A magnificent plate of jerk chicken served with rice ‘n’ peas, Caribbean coleslaw and salad, however, couldn’t seem more right if it tried. That we rate it as on a par with the royally ramshackle roadside joint that is Smokey Jerkey in New Cross doesn’t sound like a compliment, but it really, really is. Go.

A burger loaded with bacon and a smoky tomato and pepper Creole relish doesn’t quite live up to the highs of the chicken’s lip-sticking syrupy marinade, tangy charred edges and juicy meat; though does an honourable job in delivering what it sets out to, with the adornments apltly accompanying the juicy meat patty centrepiece.

We can vouch for the quality of a squidgy chocolate fudge brownies and a buttery shortbread-topped apple crumble too.  Though it’s evident that The Hideaway isn’t offering the most exciting menu you’ll find in the surrounds, for somewhere that’s first and foremost an entertainment venue, we’re bloody impressed.

Go look at the website, pick your act and check it out for yourselves at 2 Empire Mews, Stanthorpe Road, SW16 2ED. Google Maps and the 159 will help you on your way...