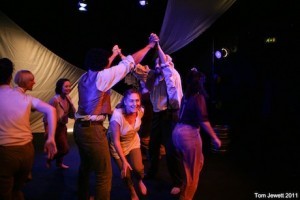 If someone in the street offered you a drink of Effra, Neckinger or Fleet, you'd be wise to keep walking. But it's OK to accept one as you take your seat at Ovalhouse Downstairs. The various beverages might be suspicious shades of yellow, but they're health and safety cleared and the group libation that marks the start of the show is the perfect way to orient you to the river and start considering its mysterious depths.

The Taniwha (pronounced Tani-fa) is a sea creature borne of Maori legend but transplanted around the world. The Loch Ness Monster? Queen Rat? Selkie? They might be her. That pull you feel when you cross the river - is it the Taniwha calling to you? The show's cast comes from all over, and the company, Shaky Isles has a 'distinctly New Zealand flavour', so this piece takes as its starting point the ex-pat experience, how travelling and living abroad changes you and your idea of home. It probes the lure of London. Why are so many drawn to the city? What makes them decide to stay or leave?

This is devised theatre, created collaboratively, that uses inventive movement, sound and song and makes the most of a sparse set. The Taniwha takes various shapes, invoked by an indistinct subaqueous clicking and suggested by boned garments that transform into a fin or articulated tail. She is first spotted by little Jimmy Frigate, lookout on Captain Cook's Endeavour, but lurks behind all stories. Readers will recognise splashes of London folklore amidst an examination of the love-hate relationship many have with the city, tales of migration, homecoming, coupling and parting. There's magic and mystery in the telling.

The Effra runs beneath Ovalhouse and in the cafe/gallery there's an installation where you can listen to its rushing waters.

TaniwhaThames is at Ovalhouse Downstairs until 3 December. Tickets £14/7.

Next Wednesday 23 November there's a special pre-show event, The Charmed and The Curious providing a chance to fondle some objects from the Cuming Museum's Polynesian and Lovett collections in the company of Chris Roberts and Rosanna Raymond from 6pm (free).

Director Stella Duffy was on Robert Elms recently. Here are her answers to his Londony questions.