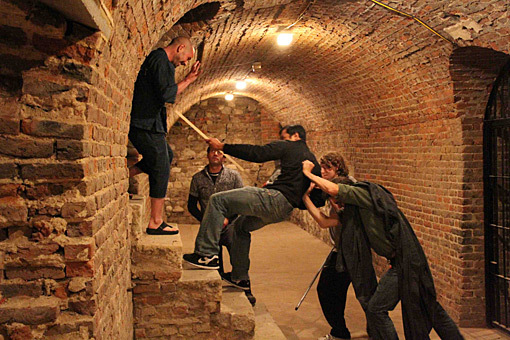 The Actors' Temple Company are putting on a pop-up performance of Hamlet with a difference: it's in the crypt of St Andrew, Holborn. You'll need to get your booking in early too – there are just nine performances for 50 people a night on 8-17 December.

The Actors' Temple has established highly successful training courses for actors. So much so that their courses are now full until September 2012. Director Liviu Tipurita, whose documentary on gypsy child thieves was featured on BBC's Panorama has made a film about the Actors' Temple:

'I went to The Actors' Temple to cast a film, and discovered a real treasure chest of talent. I was so taken with what I saw, that I got a bit lost in there, exploring it for months on end. Nothing can really substitute the experience of studying there.'

With the Wren-designed labyrinthine bays and vaulted ceilings of St Andrew, Holborn, the audience will be treated to themed refreshment and their own designated usher for this unique performance.