Was This The Tube's "Worst Week" Of Service? 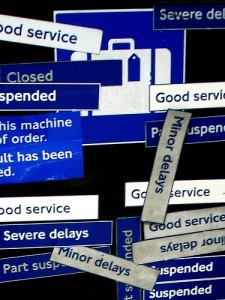 Struggled to get around on the Underground this week? You're not alone. Several lines were scuppered by faulty trains, signalling trouble, staffing shortages, and other problems. The sub-surface District, Circle and Hammersmith & City had a particularly torrid week, and the Northern and Victoria lines were also part-suspended. A total of 33 separate incidents have been recorded since Saturday.

The problems were particularly embarrassing to Boris Johnson, whose Conservative party conference speech included some upbeat words about how well the Tube was doing (perhaps he read the riot act during his visit to a depot in Upminster later in the week). Val Shawcross, never shy of any opportunity to attack the Mayor over transport issues, said that she "[couldn't] remember a worse week of delays" and that millions had suffered "huge inconvenience".

In worse news for commuters, the RMT union will ballot members on action short of a strike over what they claim are "unacceptable and potentially dangerous" measures introduced by London Underground, including train reversing procedures and  new policy for overriding door fail-safe systems on the Metropolitan line's new S-stock trains, which the union says could put passengers in danger.