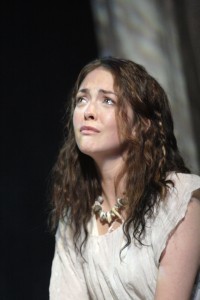 The Tempest, you say? Ralph Fiennes, you say? Yes, PLEASE. It was with high expectations that we trotted off to the Theatre Royal to see Trevor Nunn’s latest – the first time he’s taken on what is widely regarded as Shakespeare’s final play (though he’s directed 30 of the Bard’s works). And our expectations were, we’re happy to report, on the whole, met. Certainly with respect to Fiennes: for, perhaps unsurprisingly, it is he who makes this production shine.

Voldemor— sorry, Fiennes, who speaks verse like it’s his natural tongue, is a commanding, yet tender Prospero. Well-practiced at this magic stuff, he is completely believable as a man to be feared and obeyed. Elisabeth Hopper makes an innocent, childlike Miranda. A bit wet and whiney in places, with a little too much teary-eyed hand-wringing, she is, nonetheless, quite charming, with a smile so truthful, so full of unbridled joy, it’s sure to banish gloom from the most jaundiced of hearts.

You may wish to be warned: there’s a fair bit of singing. Most of which is… well, pretty dire. While Caliban’s song might get your feet tapping, with the help of ironically chanted backing vocals from Stephano (Clive Wood) and Trinculo (Nicholas Lyndhurst), we could do without Ariel’s flat, falsetto warblings.

As the singing exemplifies, Nunn’s production is rather cloying in its tweeness. A fairy actually slides down a rainbow at one point. Slides down a RAINBOW. But the spirits, who rarely appear on the stage unaccompanied by the light tinkling of bells – as though to signal the approach of Father Christmas – are actually quite ungainly in their attempts at grace. And Ariel is surely a parody of elegance, tottering about the stage on pointed toes; that is, when he’s not dangling awkwardly mid-air, swaying slightly on his wire, like in a bad school play.

While Ariel’s, er, aerial feats may seem obvious and even a little farcical, some of the circus-style rope-work is more effective; in the storm scene, particularly, with actors tumbling slowly, head over heels, down ropes, as though being plunged into a swirling sea, an illusion aided by Paul Pyant’s beautifully evocative lighting design.

Though, for the greater part, technically polished, Nunn’s production is somewhat lacking in passion. It’s longer than it need be, too, at three hours – despite the fact that this is one of Shakespeare’s shorter plays. But if you can put your hardened London cynicism to one side, you jaded so-and-so, and embrace the play’s sugary, sentimental moments, Fiennes’ performance is a damn good ‘un and well worth catching if you can.