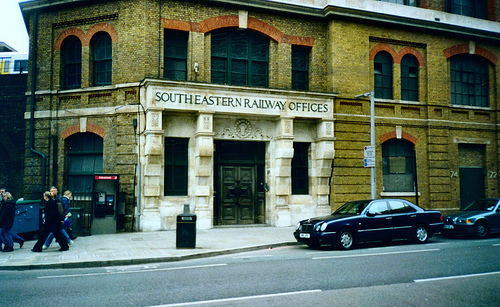 The Victorian Society has launched an appeal to save a distinctive former railway office in Tooley Street, SE1.

The South Eastern Railways Office was built, as the name might suggest, for the eponymous train operator. It was designed by Charles Barry Jr and constructed in 1893, and according to the Society, has earned a reputation as London's 'Flatiron building', mimicking the celebrated New York skyscraper of that name, because of its unusual wedge-like shape (best appreciated in this map or this photograph).

South Eastern Railways closed in 1922, and today the building is occupied by the Churchill at War exhibition, a restaurant, and a paintball firm. Yet it is slated to be demolished as part of the London Bridge station redevelopment, and replaced with a public plaza.

Chris Costelloe, a conservation consultant for the Society, argues that Network Rail's case for the demolition is "unconvincing", and argues that it should be retained within the London Bridge rebuild. Yet a request for granting it listed status was rejected last month by the Heritage Minister. The Society has urged Southwark council to refuse the demolition order, but at this point the building's fate doesn't look good.