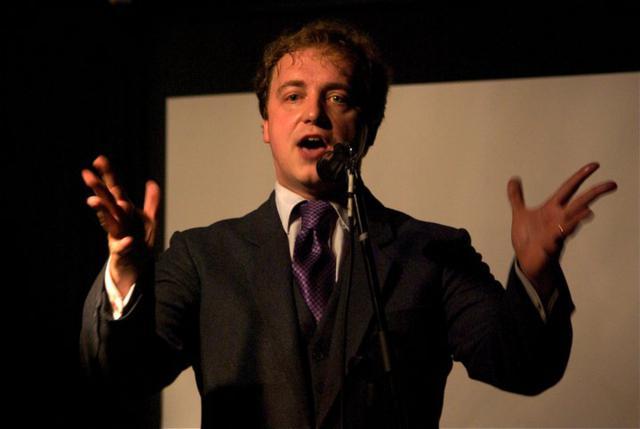 Funnyman Nathaniel Tapley is a modern Janus-and-a-half. As a writer, he has contributed to shows including Dick And Dom's Funny Business and The News Quiz and became famous last month during the week of the London riots for his Open Letter To David Cameron's Parents which went viral faster than a hacking cough on a packed tube. His podcasts of pitch-black humoured amorality tales In The Gloaming have built up a cult following among the iTune massive and, in an unusual move for people so adept behind a keyboard, he is also a very good comedian and a regular at The Forgery Club, an evening of character comedy held every month at The Albany (next instalment: tonight).

Introduce yourself in one sentence. What would someone not guess about you from having met you?
Hello, I'm Natt, I write and make comedy things. If you met me you wouldn't guess that I write a lot of stuff for children, because I will have been drinking red wine from a shoe and dancing like a loon. Probably.

You perform live comedy as well as writing and podcasting. What appeals to you about getting on stage?
I love the instant feedback you get from a live audience. And the freedom to try new stuff. And the adrenaline and workout you get from dodging hurled food when you're trying out new stuff.

What was the inspiration behind your podcasts? Are there more in the pipeline?
We made the In The Gloaming podcasts out of a love of anthology series like Tales Of The Unexpected and The Twilight Zone. I thought it was a shame that there was nothing like that around, so we decided to make some. There aren't any new podcast episodes planned, although we're in pre-production on an In The Gloaming feature film, and a stage show, which is all very exciting. Once those are done we'll try to make some more podcasts.

Who would be your ideal captive audience?
Pack the O2 with the easily-amused and terminally giggly.

Was your infamous letter to David Cameron's parents a reaction purely to the London riots or had it been brewing for some time?
The specific incident that prompted it was the response of politicians (not just David Cameron) to what had happened, but that was the culmination of decades of disappointment with politicians. Corruption and venality seems pretty evenly spread amongst the parties (Blunkett and Mandelson both had to resign twice, for Christ's sake), and I think that as a set of people, politicians are the last people we should be looking to for moral or ethical leadership.

Talking of London, what's your favourite comedy venue to go to in London?
The Albany. It's always a brilliant night out (particularly The Forgery Club and Spank! but then i would say that...)

…place to get inspired?
Almost anywhere in the city is good for people-watching. Pubs. Sitting in dingy little pubs is always inspiring. Or something similar.

…place to chill-out?
There's a shed at the bottom of my garden that's particularly fine.

…place to eat out?
Arbutus.

...view in London?
The view from either end of the Millennium Bridge. Looking at either St Pauls or the Tate Modern.

...form of public transport?
The Tube. Each carriage is a potential party waiting to happen.

Natt will be at his favourite comedy venue tonight as part of The Forgery At The Movies. There's a prize for who can spot the most film references and The Forgery Club Movie Soundtrack Disco until 2am. Its sick squid at the door or a fiver for concessions. Fun, you shall have...