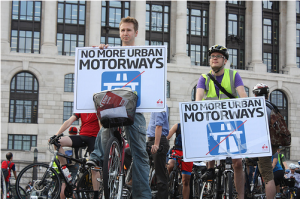 The protest, organised with only 48 hours notice via blogs, twitter and the LCC, was a furious response to TfL’s plan to start work on a scheme that had been called in for reworking by the Assembly just two weeks ago, and that the Mayor has accepted is inadequate. Alongside direct-action veterans were large numbers protesting for the first time, and many cited TfL’s intransigence and unwillingness to communicate as just as important as the flaws of the proposed junction. Both London TV news bulletins reported live from the Bridge.

Blackfriars has been the site of two deaths in the last ten years, but has proven to be a safer and less intimidating place for cyclists and pedestrians during the long-running Thameslink work, which saw the road narrowed and the speed limit reduced.

Cycing campaigners are angry that a gyratory is being introduced at the northern end of the bridge, which will see road lanes widened from two to three, the speed limit increased from 20 to 30mph, the cycle lanes narrowed to the statutory minimum 1.5 meters and a pedestrian crossing on New Bridge Street removed.

TfL’s Ben Plowden (who used to be the director of the Livingstreets campaign, which has lobbied against this scheme) argues that the the expansion of the pavement and rearrangement of pedestrian crossings in order to accommodate the growth of pedestrians using Blackfriars Station make the work necessary as the additional vehicle space is needed to prevent congestion. They have defended the 30mph decision, saying that the average peak time speed through the junction is very low so a 20mph limit is not necessary (by that logic a 60mph limit on Oxford Street would work well too).

Despite the high feelings, the protest went off peacefully with thanks due to the City of London police who handled the event in a low key and expert manner.

Image by Zefrog. See more pictures of the protest at Flickr.