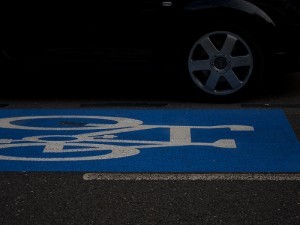 A cyclist was attacked by a motorist in Bexley Village a few weeks ago and despite clear footage of the assailant being caught on a helmet camera, police have been unable to identify him.

Simon Page was riding from Dover to London in training for a charity cycle ride when the incident happened in south London. According to his post on roadcc, Simon and the other cyclists were overtaken by a car on a section of road narrowed by a traffic island. When they tried to remonstrate with him, the driver and his passenger got out and became abusive before attacking Mr Page.

Given that the whole crime, including the faces of the attackers and their car registration was filmed on a helmet camera, you’d be forgiven for thinking that it was all neatly sewn up for the Metropolitan Police to find the driver and arrest him. But when police visited the registered keeper of the car, it was claimed it had been left unlocked with the keys in the ignition and must have been ‘borrowed’ yet thoughtfully returned afterwards.

The video has been handed over to Bexley CID where an investigation is now underway. It’s also been posted on the internet to help try and identify the attackers.