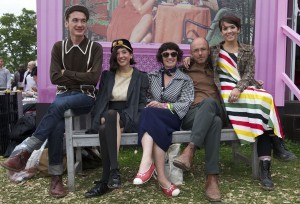 The Royal Festival Hall at the Southbank Centre will travel back in time this summer, converting into a haven for all things retro. The Vintage festival (29-31 July), which won the UK’s Best New Festival last year in the 2010’s Festival Awards, is organised by Wayne and Gerardine Hemingway. It forms part of the Festival of Britain’s 60th anniversary celebrations.

Those attending the festival can take delight in a whole array of activities for 13 hours (12pm to 1am) each day. These include watching live acts from over 70 artists including Percy Sledge, electronics pioneer Thomas Dolby, sixties icon Sandie Shaw and The Mirrors. Rooms will also be converted into nightclubs for 150 DJ’s such as Norman Jay and Andrew Weatherall. There will also be a chance for festival goers to taste vintage-style food, take part in decade-specific make-overs and shop at one of the world’s most exhilarating vintage marketplaces.

Hemmingway describes it as “a sensual delight, a big dressing-up box, a collector’s dream and joyous creative feast.” And what is there to not to love about that!

Vintage is at the Southbank Centre 29-31 July. Tickets start from £60.