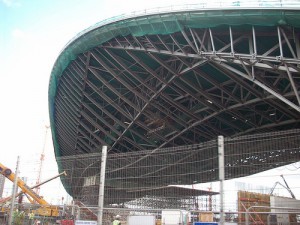 The Olympic Aquatics Centre might be scheduled for completion on time and under budget next week, but it will still prove controversial if no one can be found to operate the Centre after the Games are over.

Fears are also growing that significant Government subsidies could also be needed to keep the Centre running after the Olympic Games are over, to prevent venues falling derelict as has happened in some other Olympic host cities.

Picture by Andy Wilkes via the Londonist flickr pool.