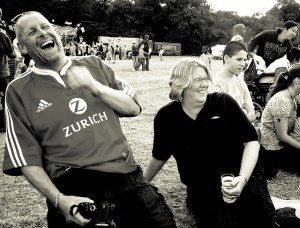 Our pick of where to find funny this week

Sunday: There's a ton of stand up to choose from at the PBH Free Fringe in Balham. We like the sound of Richard Dawkins Does Not Exist And We Can Prove It (Tavistock, 12pm). Alternatively, in the final throw of the dice before Edinburgh, Josie Long and Matt Green are at East Meets Jest (8pm, £10).

Monday: Down at the Hot August Fringe, James Dowdeswell explores the concept of the doofus (Battersea Barge, 10pm, £7).

Tuesday: We love Helen Keen. So we're very excited that she's bringing her new show to the Camden Fringe (Etcetera Theatre, 9pm, £7). After tackling space, now she's turning her attention to robots! And the future!

Wednesday: Richard Purnell's show Boobs, Work & Me is a mix of spoken word and comedy, alongside three other poet comedians: Paul Cree, Sean Mahoney and Gary from Leeds (Hen and Chickens until Saturday, 7.30pm, £10).

Friday: Bright Club is going Green at the Camden Fringe. This night of academics, comedians and musicians is one of the best variety nights around - you might be wise booking in advance (Bloomsbury Theatre Studio, 7.30pm, £5).

Book ahead: This Bush Hall Presents show may be in November, but when we say it's got Richard Herring and Stewart Lee on the bill you'll understand why we're advising to get tickets (£16.50) early.