On Tuesday night, Londonist gathered together thirty London experts from all corners of capital for an evening in an upstairs room at the Green Man in Fitzrovia, to harvest their predictions on what next year might bring. As part of the event we asked attendees to answer ten questions about London in 2012, and totted up the results for a quick and dirty picture of what to expect in our Olympic year. 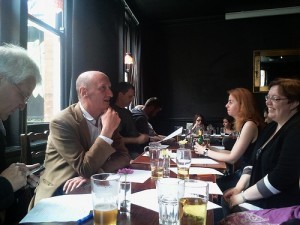 Firstly we asked about next year's City Hall candidates. 71% of those present think that Boris is likely to win a second term, and 29% expect a Livingstone victory. None of those present were backing any other candidate in what is currently a firm two horse race.

When we asked about the Olympics, nearly two thirds of people backed China to secure the most medals, and 30% backed the USA. Just 3% expect Team GB to achieve medals-table victory with the same number backed Australia.

Moving on to the Olympic budget, just 7% of those present were willing to accept the projected budget of around £9.345 billion, with no one anticipating a below-budget games. 74% of people thought the budget would be more than £10 billion and 19% thought we should be preparing for a total budget of more than £15 billion.

When asked about the possibility of an Olympic tube strike, nearly a quarter of people thought this would happen, with 72% willing to give Bob Crow the benefit of the doubt, though concerns were raised about rail failures on South Eastern trains.

Next we asked about four things London has been promised before the end of next year. 56% of those present thought it was most unlikely that any tube works would be finished on schedule, with the promised wifi rollout to tube stations coming next on 27%. Down the scale, 13% of guests did not believe we would have a cable car by the end of 2012. Most people thought the Tate extension would open on time, with just 4% considering this unlikely.

We also asked about the Olympic opening ceremony, presenting ten possible participants and asking participants to rank them in order of who is most likely to take part. People were almost certain that David Beckham would be there in some form, and Olympic legend Sir Steve Redgrave came a close second, but third place went to local boy Dizzee Rascal, who many said they would like to see given a place and one even insisted should run for Mayor. In fourth place were Page and Plant, followed by the remaining Beatles, the Spice Girls, Ray Davies, and a reformed Chas and Dave. In last place was the Jam, who would probably not want to play anyway.

Indifference reigned when it came to London's floating park between Blackfriars and London Bridge, with an equal number of people thinking it was a good idea and answering that they didn't really care, with just 12% thinking it sounded awful.

Only 15% of the group - which included some of the biggest Londonophiles in the world - had got tickets for the Olympics, and just 27% thought they presented good value for money. But when we asked which event people were most looking forward to in 2012, the Olympics did come top of the list, in spite of concerns about lack of access to parks and roads and the prospect that the majority of the group might be locked out of the Olympic Park until 2013.

Other popular 2012 events were the mayoral election, the opening of the Tate Extension, as well as the promised end of tube disruption, the Graeco-Roman wrestling, "my wedding", News International going bust, and, rather alarmingly, the magnetic polar reversal.

In attendance were: Snipe, 853, Jane's London, Annie Mole, Tiki Chris, Tired of London, LDN, London Ramblings, Westminster Walking, Caroline's Miscellany, IanVisits, London Reconnections, London Hotels Insight, and of course, the Londonist crew. Apologies if anyone has been left off this list. We forgot to take a register.