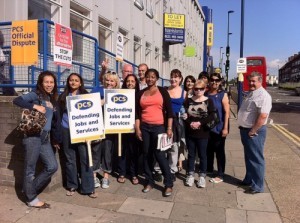 There'll be picket lines all over town today as public sector workers strike over what they say are unfair changes to their pensions, on top of reductions made by the previous government. A march is also underway from Lincoln's Inn Fields towards Westminster, going via Kingsway, Aldwych, the Strand, Trafalgar Square and Whitehall.

Some schools are closed - accurate figures seem quite hard to come by (the Guardian reckons around 40-60% of schools in London boroughs are closed, while the BBC claims only four out of 58 schools in Camden are fully open. Experiences in the comments, anyone?) and government services like job centres and courts will be closed by members of the PCS union.

Boris Johnson has been out again calling for changes to employment law, so a strike can only go ahead when 50% or more of the eligible members cast a vote (this is perhaps shaky ground for a man who was elected on a turnout of 45%). But beyond this, why are people striking at all? The government says reform of public sector pensions is vital but there was an interesting interchange between Evan Davis and Francis Maude on Radio 4 earlier which, if you'll excuse us, we're going to reproduce, because it left us rather baffled over the government's claims:

Davis: The Prime Minister said the other day that the reason we can't go on as we are is because the pension system is in danger of going broke. Do you stand by that claim?
Maude: Well I just quote what Lord Hutton said... in his report. He said very clearly that the status quo is not tenable.
Davis: That's not a quote, is it? Cos I did my little Ctrl+F keyboard search on the word 'tenable', couldn't find it in his report.
Maude: He has said, that the system is not tenable.
Davis: Did he say it was going broke if nothing was done, because I can only find a graph which shows the cost falling in terms of GDP burden. It has been repeated so often that it's unaffordable, it's out of control, I just can't see it in his report. He doesn't say it, he doesn't say it's unaffordable, he says it's not fair and that's a very different justification for reforming pensions.
Maude: And he said that if we want the system to be sustained into the future, reform is needed.
Davis: Is it unaffordable?
Maude: It will be unless we make these changes.
Davis: That's not what he said.
Maude: It will be unaffordable... The cost to taxpayers of supporting public sector pensions has gone up by a third...
Davis: Have you read the report? Why does he show the cost falling over the decades? Just explain why it's going down.
Maude: The cost is going up.

Well, they can't both be right. (Incidentally, MPs have exempted themselves from public sector pension reforms...)