Liberty Serves Up Cream Of Conscience To Council 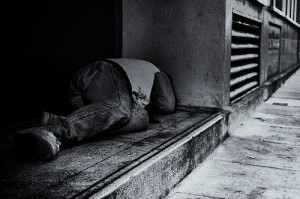 Westminster council found themselves on the receiving end of a campaign by human rights organisation Liberty today over their proposal to ban soup runs for the borough’s homeless.

Letters demanding a rethink of the council’s plans to ban rough sleeping were delivered to Westminster City Hall in a giant ‘Cream of Conscience’ soup can. Westminster council had proposed bylaws making it illegal to lie down in the street and ban charity workers from providing hot food to the homeless. It’s hard to imagine a more thoughtless and heartless way of dealing with some of society’s most vulnerable people − criminalising the homeless and making it harder to get food is positively nineteenth century. We wonder if workhouses are next on the list.

Aside from being ill-thought out, the council’s plans could also be illegal; an opinion from legal firm 11KBW indicates that Westminster council’s plans would be unlawful on a number of human rights and common law grounds.

Liberty says; ‘We are urging Westminster Council to drop these proposed byelaws, which are an offence against common decency, common values and common sense. One need only look to similarly ill-judged powers, such as the power to arrest the homeless under the Vagrancy Act or dispersal powers under antisocial behaviour legislation, to see that this approach is flawed: it targets at-risk individuals with criminal sanctions which will only make their problems harder to overcome, it fails to address the root causes of homelessness, and will at best only displace homeless individuals elsewhere.’

Westminster’s take is that handing out free soup willy-nilly to the homeless makes them more likely to congregate in the area and keep them on the streets. Unbelievably, they describe criminalising both the homeless and those who help them as ‘humanitarian ambition’, a misnomer if ever there was one. As Liberty succinctly puts it ‘no one sleeps rough for a free sandwich’. Although the council previously agreed to work with third sector organisations, such as church groups, charities and people who just want to help, they said they could still resort to legislative action.

Liberty have already written to Westminster council responding to the proposals. Visit Liberty’s website to support the campaign.