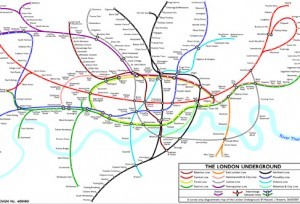 An academic at New York University has carried out a study confirming what most of us instinctively knew: Harry Beck's tube map design sometimes confuses people into making longer journeys than necessary.

Zhan Guo has published a working paper (PDF) looking at whether a map based on distorted geography can distort travellers' perceptions of reality - people still get the tube from Charing Cross to Embankment, even though in the time it takes to get to the Bakerloo platforms from the Strand, you could have walked to the river. He concludes

We were reminded of those anecdotes where Londoners send an out-of-town friend to a pub, then walk round the corner and are halfway down their first pint by the time their friend shows up. (Thanks go to Bill Bryson's Notes from a Small Island for the details) - Bank to Mansion House, Great Portland Street to Regent Street, Temple to Aldwych (OK, not a tube station, but still). But it's not just tourists: we can think of plenty of occasions when we've unthinkingly put faith in the map and taken twice as long to get somewhere.

The next question of course is: can anything be done about it? Zhan Guo ponders getting Advanced Traveller Information Systems onto phones - waiting times and crowding info while we're en route - and altering maps to reflect more accurate transfer link lengths (for example, we think the Jubilee line interchange at Green Park should carry a massive warning sign). But is the tube map already too crowded? Do we, when all's said and done, not mind a slight detour for the sake of a map that's generally nice and clear?