Theatre Review: The Trial of the Mariner @ Hoxton Hall

By Hazel Last edited 138 months ago
Hazel Theatre Review: The Trial of the Mariner @ Hoxton Hall 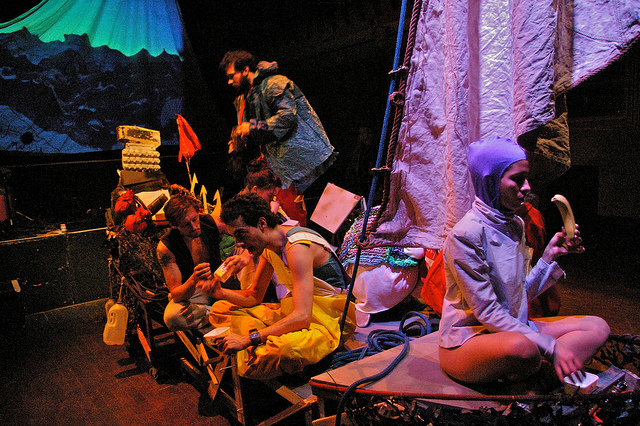 It is The Trial of the Mariner,
And it occurs at Hoxton Hall,
A curious tale, told at full sail,
About the threat of plastic sprawl.

'Tis 200 years in the future,
And here Lotos Collective unveils
That our waste has destroyed nature,
Which happens when recycling fails.

The Ship of Fools sets out,
Looking for green, safe land,
But nothing 'cept discarded plastic
Greets the desperate band.

O'ercoming mutinies and mutants at sea,
Eventually they have to stand trial;
Their judges are monsters made from junk;
The costumes are clever and vile.

The Ship of Fools is rubbish too,
Volunteers and Lotos Collective made it from trash.
It navigates around the audience,
Beware: you and the crew might clash.

Because this is interactive theatre!
Accept bananas, make thunder, stay on your feet;
This isn't for you, if you prefer to do
Theatre with an interval, three acts and red velvet seat.

This upcycled, eco-aware piece was chosen
By the youngsters of Hoxton Select,
Aged 14 to 26, they're sharing their picks
In Rebirth, the season of things they elect.

It's interesting, unusual and fun stuff
But not all rubbish on stage turns to gold,
Go see for the Junk Orchestra and Hall transformed,
And an odd tale cleverly told.

The Trial of Mariner at Hoxton Hall, until 21 May; go to the Hoxton Hall website to book and pay. Image by Lotos Collective.