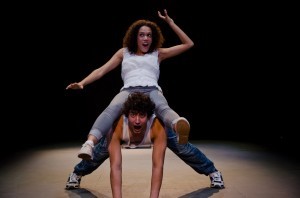 From its first, disturbing lines — a man describing to a woman how he would push a bullet between her wet lips — this is unmistakably a Philip Ridley play.

The opening combines sex and violence in trademark fashion, inviting the audience to spy on something they’d rather not see.  This is amply confirmed when the Man (he has no name) continues his monologue, describing inserting a grenade somewhere that can't be discussed on a family blog.  The play takes off on a wild ride, fuelled by equal measures of sexual jousting and terrifying vulnerability, from which it never looks likely to return.

Tender Napalm, a world premiere and quite a coup for the Southwark Playhouse, is a fantastical, entertaining and upsetting 80 minutes.  Ridley has a great deal more to offer than his unmistakable brutal fantasies, which frequently and gleefully cross the acceptability line.

He pits an unnamed man and woman against each other, seating them at opposite ends of a long, narrow space which quickly becomes a ritual combat zone.  They inhabit a mutual fantasy world created by their joint, child-like imaginations, in which they are wrecked on a desert island.

Telling each other stories, they constantly up the ante: giant serpent attacks, alien abduction, monkey armies, unicorns, and bombing raids.  Goading each other to more and more bizarre extremes, they seem to be playing a children’s game from a sexualised, adult perspective, and as the meaning of their deranged world is unlocked, we realise that the key lies their childish behaviour.

Without giving away the core of the plot, this is a sophisticated and moving examination of a relationship under extreme stress, examining how couples deal with life-changing events.  The two excellent performers, Vinette Robinson and Jack Gordon, throw themselves right into the action, making a play which revolves around endless streams of words remarkably physical.

They act out their dark fantasies, but there’s a disturbing ambiguity.  Are they aiding and abetting a desperate descent into madness, or are they guiding each other through the darkness and out the other side?  Tender Napalm has no easy answers, but poses the questions in a way you won’t forget, however much you might want to.  It’s original, spectacular, and grimly irresistible.

Tender Napalm runs at the Southwark Playhouse until 14 May. Tickets £13/18.  The play also has its own website.