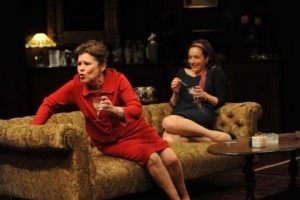 The Almeida tops off an excellent season with yet another terrific production. Edward Albee’s 1966 Pulitzer Prize-winning play is set in New York in the 1960s, in the upper-middle class, suburban home of a middle-aged couple, Agnes and Tobias, and Agnes’ live-in alcoholic sister, Claire.

Their cosy arrangement – or as cosy as it can be, considering the sisters are constantly at each others’ throats – is interrupted by the sudden and somewhat surreal intrusion of Agnes and Tobias’ ‘best friends’, Harry and Edna, who – apparently unable to return to their own home after being seized by an unnamed and inexplicable terror – come to stay, uninvited, in their house. And, if the house wasn’t full enough, Agnes and Tobias’ 36-year-old daughter, Julia, returns to the roost, yet again, after leaving her fourth husband – flying into a murderous tantrum when she finds her room appropriated by Harry and Edna. But should Agnes and Tobias ask their friends to leave or allow them to stay?

Penelope Wilton as Agnes rules both her house and the stage with her cutting remarks and icy self-control. Imelda Staunton is fun, bitter and viciously witty as her sometime mischievous, sometime malicious sister, Claire, who insists she is ‘wilful’, as opposed to ‘an alcoholic’, and takes pleasure in ruffling Agnes’ feathers. Tim Pigott-Smith is the passive, ‘very nice but ineffectual’ Tobias, as aptly described by his whining, hysterical ‘perpetual brat’ of a daughter, Julia (Lucy Cohu). Ian McElhinney as Harry, the invading best friend, is as weak a man as Tobias, with Diane Hardcastle powerfully manipulative as his wife, Edna, who drives this occupation – quickly transforming from a frightened, trembling mouse into a force commanding enough to rival Agnes in her own home.

And what a home. Laura Hopkins designs a lavish, moneyed interior for these smartly dressed, immaculately coiffed women to insult one another in, with rich mahogany, plush furnishings, crystal decanters and leather-bound books abound.

The dialogue is what we’re used to from Albee – sharp, funny, biting sarcasm, the wordy repartee between husband and wife, the spiky one-upmanship between the two sisters; ‘I have never known whether to applaud or cry,’ Claire announces after a particularly articulate dressing down from Agnes.

The play concerns ‘the rigidity and ultimate paralysis which affects those who settle in too easily,’ Albee tells us. We mellow as we age, as time ‘happens’ and our choices become fewer. In the third act, it dawns on Agnes that ‘everything becomes… too late, finally,’ and it’s about the self-deception we employ to counter this. Agnes, with her ‘ground rules’ and her strict adherence to propriety, tries to maintain the ‘delicate balance’ of the household that could so easily be thrown into chaos if its residents stared too directly at reality. Better this safety, this comfort, than a candid acknowledgement of the truth. And thus, Agnes and Tobias skip around the fact that they no longer sleep together, that Tobias had an affair, that he stopped them trying for another child after the tragic death of their young son. It also makes you think about the boundaries of relationships – how far do our responsibilities as family or friends extend?

James MacDonald’s faultless production explores these ideas and more, with a first-rate ensemble cast that blows your socks off.