At a packed press night filled with beautiful people and Graham Norton, we were invited to experience two high-concept imports in one evening. Supperclub originated in Amsterdam a couple of decades ago and the idea is fairly simple: you sit on a bed while being served food and entertained by cabaret and DJs. International neo-burlesque troupe Le Crazy Horse, meanwhile, comes to us from Paris-via-Vegas.

After its launch in late 2009, the London branch of Supperclub was given more stick than a four-poster piñata by critics and public alike. This new kid on the block has been recently refurbished and are hoping that their new big-name headliner draws punters away from the established dinner-cabaret players like Volupté, The Brickhouse and Café De Paris.

In terms of the cabaret on offer over the course of the evening, Supperclub didn't put a foot wrong. Before Le Crazy Horse take to the stage, we have a song from Le Gateau Chocolat, a plus-size diva with the voice of an angel and a smile wider than the Westway which runs above the venue. He's followed about an hour later by aerial queen Empress Stah who we watch from upstairs during the second course. We've seen her on several occasions but this is the first time we've been at eye-level with the space-bound Stah while eating risotto from a metal dogbowl.

The food itself is ambitious in style and pleasantly informal in presentation but let down by the chef trying a bit too hard.  Of the four set courses, three of them would have been better off without the copious amounts of double cream; it was probably meant to add richness but we found it disguised the flavour of the other ingredients. (Or maybe that was the point?) 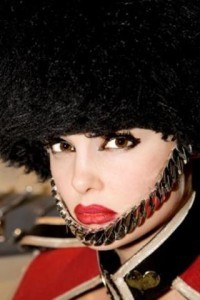 And onto Le Crazy Horse. In short, up to five stunningly beautiful girls at at time dazzled the audience with a series of brief set-pieces over half an hour. In long, this is a professional show which turns expectations inside out and, for a single scene, deliciously back the right way. This is cut-to-the-chase burlesque with near-nude girls riffing off wordplay (for example, wearing bearskins over mostly bare skin) while twisting and turning in routines which glorify the female body from head to toe.

Le Crazy Horse will be at the Supperclub on Wednesdays, Thursdays and Sundays until June 26. Tickets are £69.50-£252 which includes a three-course meal and cabaret. More information and tickets are available here.