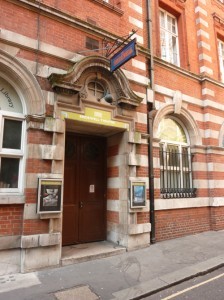 Tucked away off Fleet Street in the shadows of Christopher Wren’s St Bride’s church, with the spire that is said to have inspired the modern day tiered wedding cake, is the Bridewell Theatre.

The theatre is part of the St. Bride Foundation whose origins date back to the 1890s. This is an intriguing building that somehow managed to emerge unscathed from the Blitz in the 1940s and was once a Victorian swimming pool, laundry, library and reading room. Its emphasis was to provide educational and moral training for children belonging to the ‘poorer classes’, serving particularly the community that worked in the burgeoning print industry, with which Fleet Street is historically synonymous.

The theatre has been going since 1994, and is a versatile space, seating about 130 people. It can be hired by pretty much anyone, so presents a real mixed bag. It often plays host to drama schools and colleges, as well as professional companies. However, alongside regular evening performances, the Bridewell has been trying to get city workers to nip in on their lunch-breaks by offering Lunchbox Theatre.

Rather than being reprimanded for rustling crisp packets or wrappers, the lunchtime audience is positively encouraged to bring along their sandwiches and munch on them during the performance. All Lunchbox Theatre performances start at 1pm on the dot and last approximately 45 minutes, giving people ample time to get back to the office.

The foundation also hires out function rooms and runs youth theatre and education outreach programmes, holds regular art exhibitions in the bar and also puts on late night gigs which are usually free. Although the printing presses have long since left the area, the building houses the only library in the UK dedicated to the history of printing and typography, with over 50,000 books and periodicals.