Opera Review: The Coronation of Poppea @ The King's Head 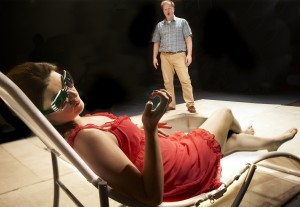 We just can’t get enough of OperaUpClose. This excellent company aims to bring opera to the masses, performing modernised English translations of traditional, as well as new operas, in tiny, intimate spaces. After winning an Olivier Award for their brilliant production of La Bohème earlier this year, they stun yet again with Monteverdi’s The Coronation of Poppea at their home, London’s Little Opera House at the King’s Head Theatre in Angel.

We are in Imperial Rome.  The tyrannical emperor, Nero, is having an affair with the young, beautiful, buxom Poppea, who is desperate to be made Empress in the place of Nero’s wife, Ottavia.  Spurned by her husband, Ottavia commands Poppea’s cuckolded husband, Ottone, to murder Poppea (much to the delight of his lover, jealous Drusilla), at which he fails and is banished along with Ottavia, leaving the way clear for Nero to marry Poppea and crown her as Empress.  ...Hurrah?

The performances are very strong, both vocally and physically, with great emotional depth from the whole company, who completely throw themselves into their characters and their characters’ desires without inhibition, thus rendering their physical impulses and visible thoughts completely truthful.  Zoe Bonner as the sly, sensual Poppea and Jessica Walker as the androgynous, nervy, power-hungry Nero are outstanding. Nero, it seems, has something of a breast fetish, constantly burying his face in Poppea’s ample bosom.  There’s a fizzing chemistry and intimacy between the two.  Constantly groping, snogging, blindfolding and tying each other up, they can’t keep their hands off one another; their relationship magnetic in its raw, animal sexuality.

Excess is rewarded in this brilliant tale, and it ends with a gorgeous, feverish duet between Nero and Poppea, ‘We are Gods! We are Gods!’ they exult, maniacally.  With immorality coming up trumps, while the representatives of virtue and duty are consigned to poverty and exile, it’s a hugely fun celebration of lust, passion, self-obsession and megalomania. What’s not to like?