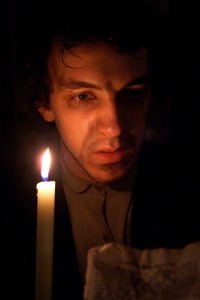 Remember your cardi if you’re going to see Belt Up Theatre’s new production of Macbeth.  In the underground cells of the Clerkenwell House of Detention, it’s dark, dank and mighty chilly, no matter how brightly the sun’s shining outside.  For that matter, make sure you’re wearing comfortable shoes too, as you’ll be on your feet for the entire duration; although, as it’s been cut considerably, that’s only 90 minutes.

That said, it’s a fantastic idea to stage Macbeth in the former prison. In this all-male production, we’re led deep into the vaults, in typical Belt Up fashion, by the actors. Groping our way through the labyrinthine passageways, the stone walls wet with damp and the darkness softened merely by the candles the actors hold in their hands, we really do feel like we could be in a medieval castle.

It’s a shame, then, that the production falls short of its potential.  It’s not for lack of trying: there are some brave choices and some interesting ones.  Ultimately, though, it lacks emotional depth.  Perhaps the most promising scene is the banquet in Act III, where Dominic Allen’s Macbeth is very alive, his mental unravelling clear, and where the audience members are effectively employed and appealed to as dinner guests.  Unfortunately, this was rather undermined by the absurd sight of the fully nude ghost of Banquo chasing Macbeth round the room.

Perhaps it’s partly to do with our intense proximity to the actors – at times, they are just inches from our noses – but some performances felt slightly exaggerated, the outward gestures of character overplayed, not deeply felt.  Not that there aren’t some good performances.  Marcus Emerton stands out with maturity and gravitas as Duncan, as well as giving a very considered, human performance as Macduff.  But Joe Hufton’s Banquo is an overly-jovial halfwit and James Wilkes’ Lady Macbeth a little camp; the relations between her and Allen’s Macbeth slightly forced and awkward.

Director Alexander Wright does his best to cultivate a sinister atmosphere.  His messengers appear faceless and silent in doorwars, hooded like prisoners, and his three witches are blithering simpletons, quite threatening in their manner, even if their ‘spooky’ crooning is a little trite.  It’s a nice touch for Macbeth to do all his dirty work himself, rather than hire the traditional murderers, and we’ve never witnessed quite such a horrific killing of Macbeth before, or such an inventive one of Lady Macduff.

While Wright makes good use of the space, there’s something inherent in the nature of the promenade style of performance that works against what it’s trying to achieve.  Shuffling from room to room with other members of the audience, we are unable to ever forget we’re watching a play; it only interrupts the flow and makes us yet more conscious of the pretence of it all.