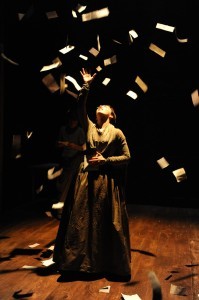 Brontë follows the lives of the literary Brontë sisters – Charlotte, Emily and Anne – and their brother, Branwell.  At the heart of the play are the claustrophobic, competitive, love/hate relationships between the four siblings.

The play is written by Polly Teale and directed by Nancy Meckler, co-Artistic Directors of Shared Experience (one of the unfortunate organisations to lose their Arts Council funding for 2012-15, as announced on Monday).

Teale emphasises the dreariness, the societally imposed limitations and the resultant rage and frustration that dominate the sisters’ lives together in isolation and spinsterhood in their father’s home on the Yorkshire Moors.

Rejected again and again by publishing houses who remind them of their ‘women’s duties’, the Brontë women are forced to stay at home while their brother, Branwell, goes out into the world with high expectations, and look on in dismay as he is crushed beneath the pressure to succeed, eventually descending into disgrace, debt and madness.

It’s an interestingly written play. The actors skip confidently between performance and narration, and extracts from the sisters’ novels are integrated seamlessly and effectively into the action.

Meckler has done an excellent job of pulling it all together into a cohesive production, splicing straight theatre with movement-based performance and some mesmerisingly beautiful imagery, enhanced by a haunting soundscape by Peter Salem.

Particularly powerful is the animalistic interplay between Kristin Atherton as Charlotte and Frances McNamee as the proverbial madwoman in the attic, Mrs Rochester. McNamee slithers and dances and throws herself around the stage in a whirlwind of red velvet, all sensuality and devilry and life itself – the embodiment of Charlotte’s inner beast, her repressed passions.  It’s a striking piece of physical theatre.

Although, at times, some of the performances feel a little too large, a little too loud for the intimacy of the Tricycle, the acting is nonetheless accomplished and assured.  Atherton’s controlled, domineering Charlotte is outwardly stable with a fiery core of desperate ambition and longing, while Elizabeth Crarer skilfully expresses deep-rooted emotion through a fluid, visceral physicality as the more reserved Emily.

Flora Nicholson and Mark Edel-Hunt give sturdy performances as Anne and Branwell, and McNamee is a tempest of pure, uninhibited passion as Cathy and Mrs Rochester – accentuating the similarities between the two, while sustaining a character contrast of near Ariel/Caliban proportions.

A visually spellbinding production; imaginative in its conception and inspired in execution.