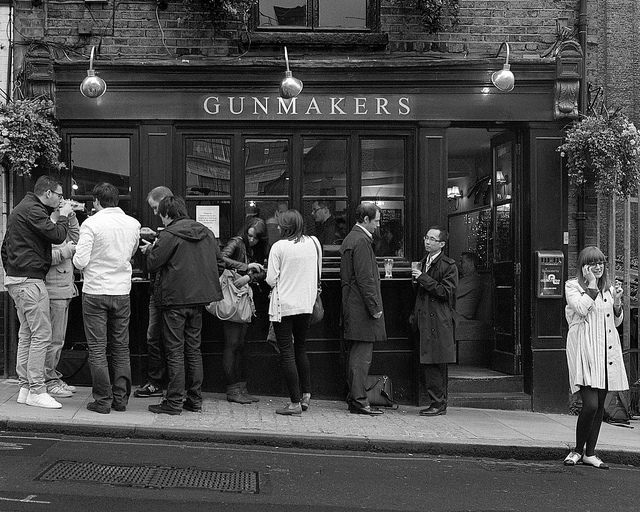 The Gunmakers – named in part after the Maxim gun, which was invented underneath a blue plaque nearby – has been making a quiet name for itself as a top-notch real ale joint for the past couple of years. This beer festival definitely justifies the pilgrimage to EC1.

The usual four on-tap ales are joined by a festival bar set-up out back hosting a rotation of 8 ales from around the country. Each is lovingly holstered in a barrel jacket sandwiched with ice packs to keep them at the right temperature with illicit and secret beers available downstairs if you ask the barman nicely. The kitchen is getting into the festival spirit, too. The usual pub grub is joined by roast pork baps (£5) and cricket-ball sized scotch eggs (£3.50, and comparable to the famous Coach & Horses’ down the road).

Not being especially sophisticated real ale drinkers – and not regular Londonist Beer Questers – we categorised the many half-pints sampled into ‘tastes a bit like coffee,’ ‘tastes a bit like fruit’ and ‘tastes a bit like biscuits,’ but highlights include the Ascot’s Royal (coffee), the Bitter & Twisted (fruit) and the Windsor & Knot Guardsman (biscuits and fruit, like a quaffable Garibaldi).

Different ales are available each day – there was a lot of buzz around the Kernel, due to make it’s official debut today – and the atmosphere is notably relaxed and friendly. The festival runs until last orders on Friday.

Image by Mike Hewson via the Londonist Flickrpool