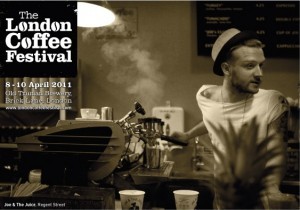 Coffee aficionados and addicts will be rubbing elbows with roasters and baristas during the first ever London Coffee Festival. The festival is scheduled at the end of UK Coffee Week and is focused on spotlighting coffee vendors and independent shops alongside the big chains.

The festival features 50 stalls from some of the industry’s elites including Monkshood Coffee, Union Hand-Roasted and Allpress Espresso Roastery, a New Zealand coffee company which has recently opened a branch in Shoreditch. The event kicks off with an Espresso Martini Launch Party with festivities spilling over into the weekend including an appearance by champion barista Gwilym Davies, coffee making and roasting demos, live music, and talks about how to brew that perfect cup of joe. Munchies will also be available from the likes of Roast Hog, Heavenly Cakes, and Miss Poppy Cakes. X-factor contestant John Adeleye will also be performing each day of the festival, but don’t let that keep you from going.

100% of the proceeds from the festival will go to a good cause, Project Waterfall, which aims to help clean water projects in African countries that produce coffee. The initiative hopes to be spearheaded first in Tanzania to help up to 7,000 people gain access to safe water. A chance to help a worthy charity and mingle with coffee lovers from around the capital, that's a day well spent.