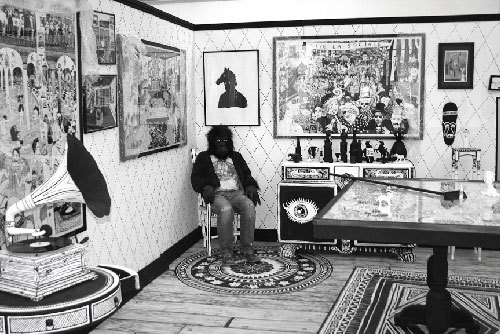 A straggly group of strange Edwardianly bearded types spilling out onto a Hackney street? It must be a gallery opening, right?  Well, yes, correct. Set in Shoreditch, next to the dead boarded up space that was The Foundry. However, let's leave the world of artistic cliché
behind, the show, called 'Close Eyes to Exit' is by LE GUN and their offshoot Bare Bones, after all.

If you don't know about LE GUN and Bare Bones, and you have any interest in modern illustration then hang your head in shame. We loved the show for LE GUN 4 The Family so much that we gushed like an excited teenager in the first flush of teen icon crush.

We're glad to say that this new show didn't disappoint. Two rooms of fantastic things, and one room showing a film, with a mural painted in the corner that admittedly didn't grab us quite so much.

The entry room has, on one side, a series of artworks based on the Tarot archtypes. There's a reworking of The Devil card, for example, which has a baby with a strangely old face and Hitler moustache. On the other side: oddities such as a red and black print of Shane McGowan eating records.

But this is not really the main exhibit. That honour goes to the Unknown Room, a 3-D lifesize drawing based upon the contents of the sadly departed George Melly's briefcase. This contains a large map of Legundon (which appears to be near Belgium), a table which was impossible to photograph without it looking like a drawing, a drawing of the room itself and much else besides.

Really, please make an effort to see this show. You won't be disappointed.