In Pictures: Gay Kiss-In Outside The John Snow, Soho

About 600 people gathered last night outside a popular Soho pub in support of a gay couple who claim they were asked to leave for kissing there on their first date. 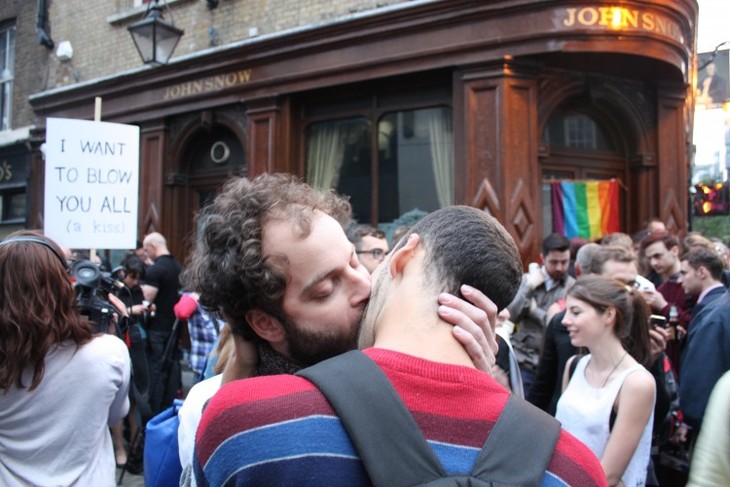 The management of the pub carried on with their rather inept track record in terms of PR, having refused to speak to any journalist and having failed to release any statement to provide their side of the story. In the middle of the afternoon, hours before the event was due to start, they decided to forfeit the takings of a busy Friday night and close the establishment.

At 7pm, some of the protesters locked lips mostly for the benefits of the assembled press who were there in force, due to the considerable media interest the story has received since it broke on Thursday morning.

Many others, presumably singletons looked and cheered. Also looking on were human rights campaigner, Peter Tatchell, and comedienne and Mayoress of Camden, Amy Lamé.

Members of the Socialist Workers Party tried to disrupt and highjack the event but they were quickly silenced and the festive atmosphere that otherwise prevailed quickly returned.

The "happy" couple at the centre of the story made an appearance and were quickly snapped up by reporters and photographers. They apparently plan a second date, sometimes after Easter. Hopefully a more low-key one.

Another kiss-in is planned for 21st April.

The Guardian has a video here.