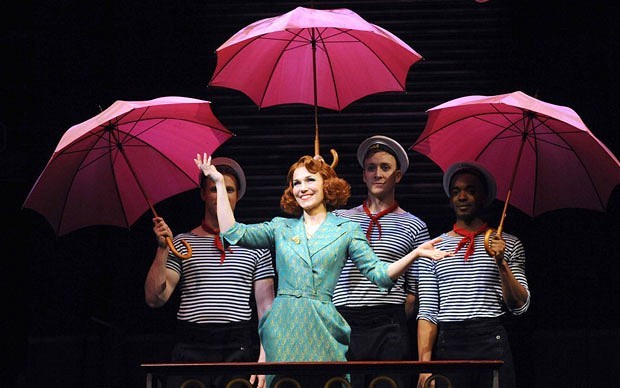 Sacre Bleu, Zut Alors, Quelle Horreur, and as for the choreography: Fosse septique … pick your own Francophone diatribes, this is vachement awful.

It’s a shame, because the hand on the Kneehigh Theatre tiller is Emma Rice who helmed their extraordinarily inventive Brief Encounter, but to continue the boating metaphors it’s no coincidence that Cherbourg was the port from which the Titanic steered out into the Atlantic, you can’t wait for this leviathan to hit its own iceberg.

Reworked from the Jacques Demy movie which made Catherine Deneuve a star, it's a tenderly simple story of very young lovers parted by circumstance – he’s sent to fight in Algeria whilst she covers her pregnancy marrying a rich bore.  He returns, she’s gone, he marries the maid.  The central character of the girl’s mother is played here by the much undervalued Joanna Riding as a haughty harridan in a ginger Fanny Cradock wig, and the lovers limply by recent Guildford graduate Carly Bawden and Andrew Durand for some unfathomable reason imported from the US to play Guy, despite the fact the West End is crawling with unemployed lightweight younger leading men: shout across the street from the Gielgud to The Yard bar and you’d find a dozen his equal.

‘Internationally renowned’ (although not so much in this country) cabaret artiste Meow Meow – actually a harmless Australian soubrette called Melissa Madden Gray who assumes her fantasy alter ego rather like Humphries does Edna – is contractually obliged to front the soiree in a split skirt, fishnets and black beehive.  She also has to hustle the reluctant audience participation so morphs Irma La Douce with Gladys from Hi-de-Hi in a performance which is more cliché than Clichy.  Mind you, in the echoing grove of yesterday’s second press night with three-quarters of the seats unsold, not even Ken Dodd could have warmed us up.  Her ‘straight’ entr’acte solo ‘Sans Toi‘ is delivered sans taste and with so much eye rolling, r’s trilling and lardoned pathos that the producers of ‘Allo ‘Allo would have cut it from embarrassment.

There’s a highly mechanized set from Lez Brotherston with tricksy use of model buildings, artful neon and an unexpected skate ramp, colourful costumes, and a seductive lighting scheme by Malcolm Rippeth to make it look lovely, but it’s all so much empty effort when the performance doesn’t engage with the audience.

London weather’s so unpredictable but we expect folded Umbrellas before Easter.

Umbrellas of Cherbourg is scheduled for a seven month run at the Gielgud Theatre, Shaftesbury Avenue, W1 but we recommend an early viewing for those who would like to be sure to see it, and tickets from discount sources are widely available.