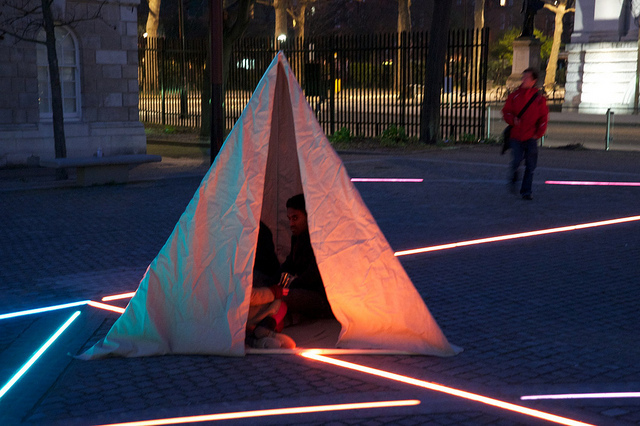 Hackney's Sophie Nathan launched her bid to become Mayor of London on Friday night at the opening of 'If Not, Then What', an installation on the parade ground at Chelsea College of Art.

Representing the Post Capitalist Party Nathan stood in the 2010 council elections for Hackney. It was part personal, part political and part art experiment which racked up 131 votes in the Dalston ward. Now she aspires to take on Boris, Ken et al for City Hall.

The installation, inspired by protest camps and peppered with free standing sculpture by Chelsea students, became campaign HQ on Friday night. Intended as "a temporary creative think-tank for arts involvement with politics" the space will be used for events throughout the week. These include the University for Strategic Optimism open day on Wednesday, 12-3pm followed by some Sonic Improvisations. Grunts for the Arts set up on Thursday inviting applications for the Real Trident Replacement Challenge and Saturday sees a whole day of live interventions including Mark McGowan protesting against the excesses of the Royal Family by crawling from the college to Buckingham Palace.

Saturday will also see an address by Sophie Nathan. Don't expect a manifesto though. The party doesn't believe in them.