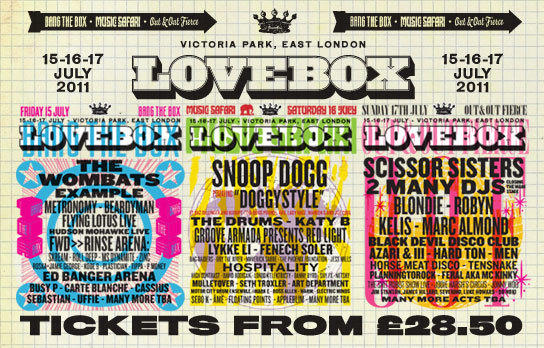 Lovebox really hit its stride last year with the non-inclusion of founding fathers Groove Armada on the line-up (...for yet another year) and a more defined music policy. Often seen as the more trendy, less commercial version of Wireless, the festival takes a step further towards the mainstream with the announcement of an intial line-up for this year's festival held on July 15, 16, 17 in Victoria Park, Hackney.

Sticking with the three day line-up they introduced last year, Friday seems by far the weakest, with the frankly bizarre choice of The Wombats as headliners, also reflected in the cheapest ticket price of £28.50. The main attraction that day will be the Ed Banger arena filled with Busy P, Cassius, Uffie etc and the Rinse Arena starring Skream, Roll Deep and Ms Dynamite. It's not really worth taking a day off work for and we're much more excited about Saturday and Sunday when Snoop Dogg and Scissor Sisters headline respectively and prices take a jump up to £48.50 (or £87.50 for a double day ticket).

Let's rewind there... Snoop Dogg. Making his only European festival appearance this year in Victoria Park, and it's not just him. He'll be joined on stage by Death Row label heavyweights (i.e. Warren G, Karupt and Daz Dillinger) to perform his seminal album 'Doggystyle' in full. Bring on the Gin & Juice. Other Saturday highlights include the return of Groove Armada with their special Red Light show as well as our favourite new popstar Katy B, Swedish siren Lykke Li and a Hospitality Records stage. Sunday comes under the tagline 'Not shady... just fierce' and sees the Horse Meat Disco crew returning to disco up the park. Whether they bring the NYC Downlow remains to be seen but there will be plenty of dancing to be had regardless with 2 Many DJs joining the Scissor Sisters on the mainstage to close the festival and the rest of the line-up including the likes of Blondie, Robyn, Kelis and Marc Almond.

Tickets range from £28.50 for Friday only to a whole weekend ticket for £99 with lots of options in between and are on sale now. More information on the Lovebox site.