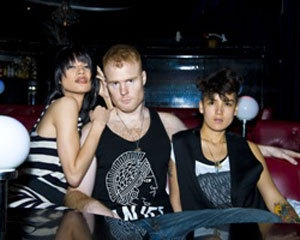 Sadly, hanging over the show was the news that the rest of the UK tour had just been cancelled due to the injury of a band member. They were clearly disappointed that it would be their final show, but Butler and co. were still determined to go out with a bang.

And even though it was relatively early on a Friday evening, the crowd at Village Underground were happy to supply the sort of hedonistic behaviour that suits Hercules' misty-eyed attempts to summon up the ghosts of 1970's NYC. With so many people lost in music it felt at times like some of the crowd had forgotten the fact there was a band actually playing on stage — especially at the moment when, for once, a song actually finished instead of segueing smoothly into the next one, and rather than applauding everyone looked up as if the DJ had dropped the ball.

The set drew heavily on their new album 'Blue Songs', and although some of the group's better-known guest vocalists like Antony Hegarty and Kele Okereke were busy elsewhere, the three singers on stage put enough poise and passion into the performance to more than compensate. New tracks like the horn-laden Falling and Giorgio Moroder-esque Painted Eyes proved themselves to have solid dance-floor clout, and by the time modern classic Blind came on, the devil-may-care atmosphere had reached its rapturous peak. On Friday, a little corner of EC2 was briefly full of disco spirit — it's just a shame the rest of the country is going to miss out on the trip.