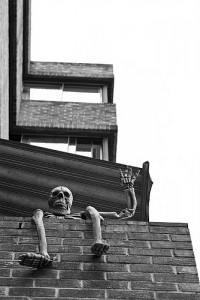 Are you one of the 20 people in London who have experienced a ghost? According to a survey and handy ghost map by paranormal researcher (we would love a job title like that) Professor Richard Wiseman, 25% of people in the UK claim to have seen something go bump in the night.

London and the south east top the list of regions least spooked by ghosts, though last Halloween, Fortean London discovered demons in the guise of Elvis, skeletal porters being seduced by spectors and cats being moved by invisible hands in their tour of London ghosts.

Professor Wiseman says the figure, which is apparently the highest on record since the 50s, could be due to TV programmes such as Most Haunted which in turn suggests that the 25% is a measure of the UK’s gullibility rather than their ghostly experiences.

Have you seen a ghost? Tell us about it in the comments.