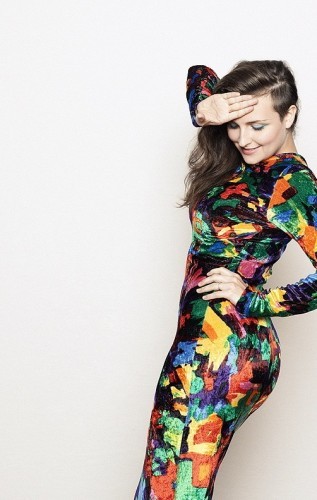 Not only author and illustrator of Mistakes In The Background, Ugly Shy Girl and Echoes, Laura Dockrill also resurrects her words on the stage performing poetry spanning festivals to bookshops; including the London Literary Festival, Big Chill, E4 Udderbelly, Latitude and Domino festival in Brussels. Named one of the top ten literary talents by The Times and one of the top 20 hot faces to watch by ELLE magazine, Laura has performed her work on Woman’s Hour, The Verb, Newsnight, BBC Breakfast and each of the BBC’s respective radio channels 1-6. She's currently plotting her next book, judging the John Betejeman poetry prize and creating a series of bespoke artwork pieces.

He loved them.
If anybody ever said ‘Would you like my gherkin?’ he’d kiss them.
He went to prison
for robbing a chippie
he didn’t do it very quickly
because he was nervous
and his face went all prickly …

and in prison
he couldn’t eat them
but when he got outside
his mates made him a gherkin cake as a surprise
how he’s missed them,

but then in Brixton,
he saw a girl in a green trackie,
he put his hands around her mouth and took her back
to his flat where he
put her in the shower for an hour
and rubbed her with a scourer
he beat her head against the tiles
which knocked her out for a while
and she woke up to the lid screwing on the jar.

Dead now and pickled,
every day more shrivelled
and the peppercorns on her skin like new moles
and the people said,
‘Suicide, what a surprise! It is the saddest sin!’
If only they knew what that man was up to –
Pickling young ladies like gherkins.
So next time when you’re dressed in green, blue or black
Don’t think of yourself as a style icon –
Think of yourself as a snack.