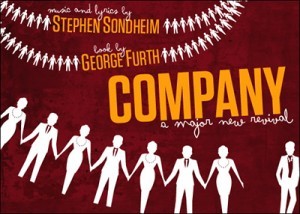 Poor Steve Sondheim.  During his 80th birthday year in 2010 his works were exhaustively produced and his dramatic entrails more pored over than in any autopsy.  There’ll be less of a retrospective when he’s dead.

In London, the revivals ranged from a lumpen ‘Follies’ atop a Walthamstow boozer to a puppyishly adoring all-star Albert Hall Prom which was the theatrical equivalent of humping the Great Man’s leg.

As the dustcart follows the Lord Mayor’s show, here comes Southwark Playhouse’s belated production. Company contains some of Sondheim’s best lyrics, is most autobiographically representative of his own views on relationships, but it’s not the best ‘book’ musical in the canon.  Indeed, the script by George Furth is so inconsequential that the show works largely as a song cycle wherein married friends revolve round bachelor Bobby in a carousel of exhortation to find a wife.  Updating it with iPhones and MacBooks robs it of a certain 70’s ‘Mad Men’ style and contemporaneous conventions about relationships, but does bring some fresh perspectives.

In his first fully-fledged directorship, Joe Fredericks allows too much unevenness: Siobhan McCarthy’s uncannily accurate impersonation of Bette Davis doing Margo Channing is funny but can undermine the power and pathos in her bravura rendition of ‘Ladies Who Lunch’, Mark Curry’s archly dated portrayal of husband Larry clings more to Mr Clifford in Acorn Antiques than to Broadway, and for a musical so deeply rooted in Manhattan the accents wander widely and the singing projects some very English vowels.

Cassidy Janson as Amy scores highly for her comic timing and vocal precision in ‘Not Getting Married Today’ in which she’s partnered by the strong and charming voice of Greg Castiglioni as Paul.  Two of Bobby’s single girlfriends also stand out: Katie Brayben as April the air hostess manages to find the comedy in the script, her dumb blonde resistance to Bobby’s chat-up lines were one of the few laugh-out-loud moments, and Michelle Bishop as spunky punk Marta takes command of ‘Another Hundred People’ with genuine panache.

Bobby is meant to be an enigma, often portrayed as a coolly suave playboy who degenerates into a self-pitying mess, but Rupert Young‘s performance showed less of an arc since his Bobby is a greasy sweaty cokehead from the outset, perpetually dishevelled and disoriented.  It’s a more modern reading of the part and emotionally distanced from the audience, but improves in the second act when ‘Being Alive’ was thoughtfully phrased and strongly delivered.

The singing is mostly very fine indeed, but the production lacks pace - you could see the audience’s attention wander - entrances need more immediacy and less clunking over the underlit Bridge-of-Sighs-made-from-scaffolding set - and for the dialogue to crackle authentically, cues need to be picked up much more smartly.

Company continues at the Southwark Playhouse beside London Bridge station until 12 March 2011, Tuesday-Saturday evenings at 7.30pm, matinees Saturday and Sunday at 3.30pm.  Tickets are unreserved and cost from £10 to £22.50 depending on how soon you buy them.  Southwark also has a cute advance-booking deal whereby 5 tickets for future shows are sold for a total of £37.50.  Online ticket sales here, or call box office on 020 7407 0234.