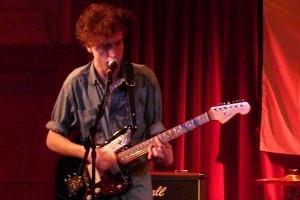 Opening the night were Guards with a chandelier shaking set of Mercury Rev-like rock with a touch of Arcade Fire marking themselves out as ones to keep an eye on. The excitement surrounding them has been buoyed by main man Richie being the brother of Madeline Follin, half of the mysterious duo Cults, next up tonight.

Cults debut single, “Go Outside”, has been causing a stir on the interweb and saw them being snapped up by Columbia at the tail end of last year. With half of Guards as their backing band, their boy girl vocals and breezy indie-pop has a sinister underbelly, and they succeed in pulling off a confident set proving they're more than capable of living up to the  hype.

Finally the headliners take the stage. Kicking off with current single “Holing Out”, Yuck’s shoegazey grunge may come as bit of a surprise for fans of Daniel Blumberg & Max Bloom’s previous band, the heavily hyped but short lived Cajun Dance Party. With a love of fuzzy guitars and unafraid of a great melody their sound is unashamedly in debt to American mid 90’s alternative rock, picking the very best elements of seminal bands of that era - notably Dinosaur Jr., Pavement and Sonic Youth. Some would have argued a grunge revival was the last thing we needed right now, but with many of the old guard doing the rounds again, it’s about time some fresh talent entered the ring. Rather than sound like a pastiche, they draw on their influences to create a sound that’s their own. They succeeded in attracting both young hipsters and men of a certain age reliving their plaid clad youth, a testament to the band proving they’re not just a nostalgia trip but also genuinely fresh and exciting. With a set packed full of fan favourites including the summery "Georgia” and the dreamlike “Suicide Policeman” they rounded off the evening with a storming finale of recent single and album closer, the epic “Rubber”.